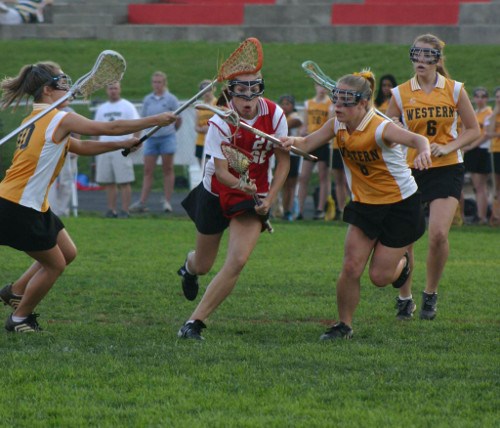 Aligning rules to match the flow of the game established by free movement was a major theme within the high school girls lacrosse rules changes, which also featured notable clarifications to player position and self-starts from out-of-bounds as well as alterations to substitution frequency, field fouls, equipment and goalkeeper placement.

The 19 rules changes, which come following a one-year hiatus from the rules-making process as a result of the COVID-19 pandemic, were proposed by the National Federation of State High School Associations (NFHS)/USA Lacrosse Girls Lacrosse Rules Committee at its virtual rules meeting held June 21-23. All 19 proposals were later approved by the NFHS and USAL Boards of Directors.

“The rules committee had a huge task,” said Lindsey Atkinson, NFHS director of sports/communications associate and liaison to the Girls Lacrosse Rules Committee. “After adding self-starts and free movement to the high school game followed by a year without play, the committee was asked to examine several other areas impacted by the increased pace of the game and they certainly rose to the challenge.”

The focus allowing the rules to compliment free movement shows up most prominently in the committee’s edits to several sections of Rule 4 – “Time Factors, Substitutions and Scoring.”

To reduce the potential for false starts during the last two minutes of each half, the game clock will no longer be stopped in every instance that the official blows the whistle to stop play (Rule 4-1-2). A similar change was made to Rule 4-6, mandating that in overtime, the clock will only stop during official time-outs or fouls committed in the critical scoring area.

New criteria were added to Rule 4-3-3 that dictates where play will be resumed following a possession time-out. If the goalkeeper has possession of the ball in the goal circle, play will now be restarted in the goal circle. If the game is to resume with a free position, play will be restarted at the location of the free position. Additionally, no player will be allowed within 4 meters of the player with the ball when play is being resumed.

Substitution restrictions were removed from several sections of Rule 4 and Rule 2. Prior to these changes, substitutions were prohibited during various stoppages in play including those required for player injury (Rule 4-2-3e), player ejections (Rule 4-7-6), replacing an illegal or broken crosse (Rules 2-4-7b and 2-5-2d), and re-draws during the overtime period (4-7-5b).

“While there are 19 rules changes passed this year, the majority of them are tweaks and minor adjustments as the game evolves in the free movement era,” said Caitlin Kelley, women’s game director at USA Lacrosse. “The committee did a great job of looking through the details of the game and modifying substitution rules, equipment allowances, and penalty administration to better allow for the flow of the game and the student-athlete experience.

Beyond a pair of changes permitting hair ties and other soft, non-rigid materials worn on the arm and securely fastened hair adornments (Rule 2-7-5), the other major equipment-related modifications are found in Rule 2-7-3, which allows face masks that are soft and non-abrasive.

“The rules committee reviewed both the permissibility of headwear for religious and cosmetic reasons and securely fastened hair adornments that do not endanger other players and agreed that eliminating barriers to participation was important for the growth of the game,” Atkinson said.

Under Rule 2-6-1a, goalkeepers are no longer required to wear shin protectors, as there is no standard for those pieces of equipment. Goalkeepers still have the option to wear shin protection with padding up to one inch in thickness, which also creates consistency with boys lacrosse. Additional changes to Rule 2-6-1 detail the additional equipment options for goalkeepers, including a clear, molded and non-rigid helmet eye shield, as well as tinted or clear eyeglasses.

A new equipment option for officials was added as new Rule 2-8-5 offering the ability to use audible wireless communication devices as a means of adjusting to the increased speed of the game.

Rule 10-1 PENALTIES was modified to include language on the assessment of a false start penalty committed by the goalkeeper or her deputy in the goal circle. PENALTY 5 of the rule now states that a free position will be taken at the closest dot in that instance, with the goalkeeper and her deputy remaining in the goal circle and no defensive player placed behind the free position.

The final major rule change for the 2022 girls lacrosse season is the addition of Rule 9-1k, which lists the “Illegal Exchange of the Crosse” as a minor field foul. Under the new rule, an acceptable exchange of a field crosse with a crosse from the bench area can only be done with both crosses entering and exiting through the substitution area.

A complete listing of the girls lacrosse rules changes will be available on the NFHS website at www.nfhs.org. Click on “Activities & Sports” at the top of the home page and select “Lacrosse-Girls.”

According to the most recent NFHS High School Athletics Participation Survey, 99,750 girls participate in lacrosse in 2,877 high schools across the country, making it the nation’s 10th-most popular girls sport.

Climate Change and Emerging Technologies are the final choices for th.