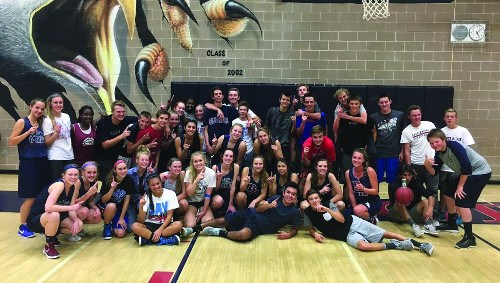 In a November afternoon, Dakota Ridge High School’s (Littleton, Colorado) girls basketball team held one of its weekly off-season, voluntary open gyms to build skills and to work on conditioning. What made this session unusual compared to the many other days of preparation was the gym was not only filled with three levels of girls working out, but it also had 20 new “members” joining the activity. Running in the drills, extending effort and sweating alongside the girls basketball team was the Dakota Ridge boys baseball team.

These young men were involved in a new program at Dakota Ridge High School. In an effort to build student-athlete connections and relationships with the added hope of increasing support for all athletic programs, Dakota Ridge created the “Eagles Supporting Eagles” initiative.

The “Eagles Supporting Eagles” program was introduced initially at a pre-season meeting of all head coaches. Each coach randomly drew a partner coach or team to work with for the entire school year. The original idea was to try and pair new teams at the start of every school year.

However, since many coaches had started to build a strong connection and developed a successful bond between their programs, the staffs requested changing the format of switching partners to every two years. Another adjustment of the initial concept of “Eagles Supporting Eagles” was made because some teams struggled with consistent off-season participation from their student-athletes. This past year, therefore, Dakota
Ridge partnered with teams in the same season to make the process of supporting another group of athletes easier. 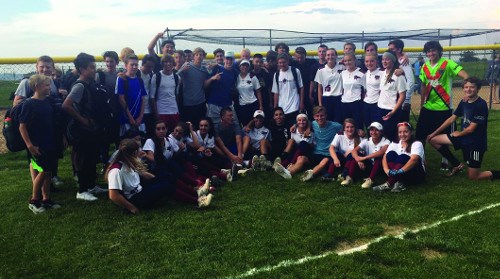 In the meeting at the start of the year, coaches of the partnered teams discuss and turn in a plan for three events that they are going to work together during their season. The staffs also explore how they can mentor
each other and they also look at methods of supporting each other before rivalry games.

Some of the suggested activities include team pre-game dinners, gift bags, posters and social media postings before an important game or match, and creative, unusual, but school-approved methods of encouraging the other team. A document is turned in with the plans for the upcoming year and this guide is re-examined during the end-of-the-year evaluation meeting with the athletic director.

As a result of the “Eagles Supporting Eagles” program, there have been many exciting activities that have emerged and increased school spirit and participation. For example, the boys lacrosse team cheered at a boys tennis team match and brought pizza for a postmatch party. Also, the cheerleaders went to a golf match with a good luck bag of goodies and were assigned a golfer to follow and encourage.

For several of the girls swim meets, the ice hockey team members worked as timers and the swimmers enthusiastically cheered the hockey team as it advanced to the playoffs. In addition, the cross country team sponsored a student tailgate activity before football games and served as parking lot attendants to help attract the student body.

In particular, there were two teams that had a tremendous amount of fun and success with the “Eagles Supporting Eagles” program. The coaches of Dakota Ridge’s girls basketball and boys baseball teams strongly bought into the concept and it produced a great deal of team bonding with both groups. 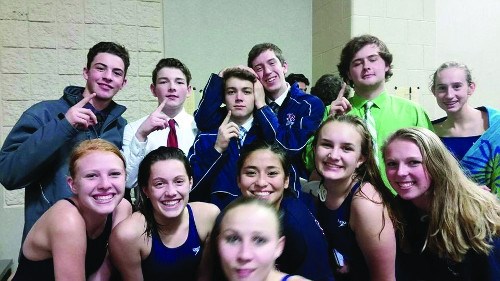 “It was great to watch my players go through the basketball workouts, because it was something out of their comfort zone and they had to do things they were a little at ease with and perhaps awkward,” said Jeff Legault, Dakota Ridge head baseball coach. “They thought they would walk in the gym, shoot some baskets and it would be easy. However, after a complete workout, the guys left with a whole new appreciation for the work the girls basketball team put in. Partnering up with their team has been a great experience for my players, and it was very rewarding to watch their respect and support for each other grow due to the team activities that we planned.”

The impact on the athletes is the most important aspect of using “Eagles Supporting Eagles.” Skylar Lodice of the Lady Eagles basketball team describes it from the athlete’s viewpoint.

“It has been a great opportunity to collaborate and team up with the baseball program,” Lodice said. “It has deepened relationships and provided girls basketball with a chance to support another program that they may not have watched if the partnership hadn’t been arranged. I am very proud to be a part of DRHS athletics program and appreciate all the teams, the students and coaches that participate in the programs. I feel lucky to work with an athletic director that is dedicated to facilitating a family atmosphere among the student-athletes and coaches. I believe this is one reason why we continue to have success within our athletics program.”

In a short time, “Eagles Supporting Eagles” has greatly affected Dakota Ridge’s culture and climate in a tremendously positive manner. Coaches are collaborating and working with each other. Student-athletes are having fun and supporting other athletic teams and their athletes. The exciting aspect about this initiative is that it is constantly evolving and improving. It is only going to get better and the beneficiaries are the student-athletes, coaches and the athletic program.

Matt Heckel is the athletic director and assistant principal at Dakota Ridge High School in Littleton, Colorado. He is a member of the awards committees for the National Interscholastic Athletic Administrators Association and the Colorado Athletic Directors Association.