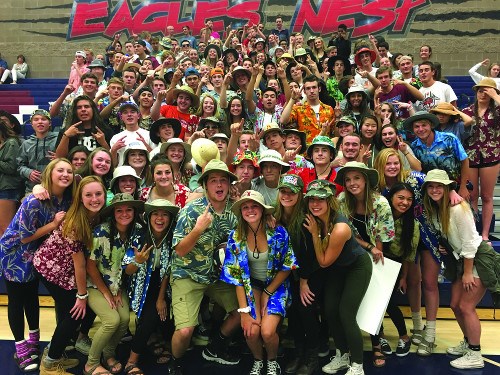 Besides trying to build competitive teams, develop quality studentathletes and hire exemplary coaches, one issue that may be keeping athletic directors up at night is how to encourage students to support their teams with positive enthusiasm and appropriate cheers at games and events.

A few years ago, Dakota Ridge High School in Littleton, Colorado, was facing this exact dilemma. For athletic events, it had a negative reputation throughout the district due to the behavior of the fans during
games. Dakota Ridge needed to create a new team to help the administration in building a positive fan base, so the school created a team of Super Fans.

The Dakota Ridge Super Fan program has evolved over the years and has had a tremendous influence in guiding the school’s crowds, which not only have increased in numbers, but usually follow the expected
sportsmanship standards in a fun and enthusiastic manner.

At the start of every school year, Dakota Ridge attempts to find the best members for this “team” – those who are the most supportive and positive students at the school and preferably seniors. Administrators work to identify young people who are respected within the student body and are willing to be in front of the crowd at games leading and encouraging cheers. The administration wants to make this a respected leadership position that students desire, so tryouts are promoted around the school. The administration picks five to seven students who they feel deserve this special honor.

Since starting the Super Fan program, the school has developed strong guidelines. In order to be part of this important group, interested students complete a written application. The Super Fans not only have
school attendance expectations, but they also have to meet weekly eligibility standards. Just like student-athletes, Super Fans must complete the District’s Athletic Code of Conduct, which outlines behavior expectations and other criteria.

Super Fans are expected to memorize the school fight song, and they agree to attend a pre-determined number of athletic events in addition to several activities such as choir and marching band performances
and school plays. Dakota Ridge applicants are also required to complete a short paragraph explaining how they are going to promote crowd enthusiasm throughout the student population.

After identifying the next group of Dakota Ridge Super Fans to lead the school fan base, the next important step is to train them. The first meeting is dedicated to sharing the sportsmanship expectations established by the Colorado High School Activities Association and the Jefferson County School District. Also, an explanation is given as to why certain cheers are not allowed at events and the possible consequences to the school for inappropriate sportsmanship. Alternative cheers are provided that the spectators can use instead of the unacceptable ones. This is an important step because it lets the Super Fans know that this is a statewide initiative and not just the athletic director’s decision. 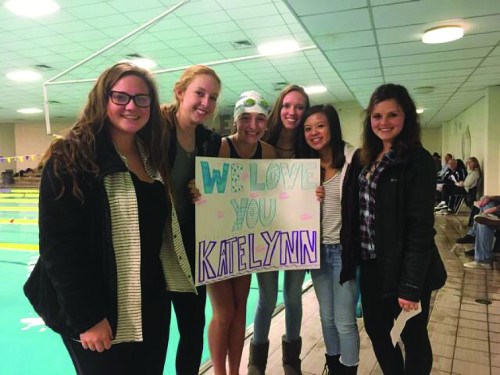 A separate meeting is conducted with the Super Fans and the marching band to learn how to interact with the drum line. In addition, the Super Fans receive online training to discover some of the positive cheers and crowd interactions that schools across the nation are using to create a fun, positive atmosphere. Dakota Ridge has incorporated a number of the excellent ones from other schools.

To help promote themes for games and events, it is important to create a communication system between the Super Fans and the student body. There are various vehicles, programs and phone apps for schools to utilize. However, Dakota Ridge uses the Group Me messaging service. At the start of the school year, Dakota Ridge advertises and promotes this service throughout the school in order to have the student body register for text messages and alerts. Several days before games, Super Fans communicate the themes for the spectators and provide other pertinent information. Are we doing a White Out? Is it a Neon Night? Will there be a fan bus? All of this is communicated with a safe text-messaging system.

After selecting the Super Fans, training them with regard to expectations and then providing suggestions about how to lead the crowd to create a positive environment, the next important step is actually using them at games and events. Super Fans sit in the front row at games and use a dry erase board to communicate with spectators and announce the cheers. For major games, the Super Fans plan a crowd spirit activity. In the past, a Star Wars light saber battle, Moses parting the Red Sea, and activities involving our mascot have been some of the special events.

Dakota Ridge Super Fans meet with the administration and determine which events the school would like to specifically promote with the student population. The schedule includes choir concerts, theater and marching band performances. They also attend tennis matches and golf tournaments, and they support the spirit squads. 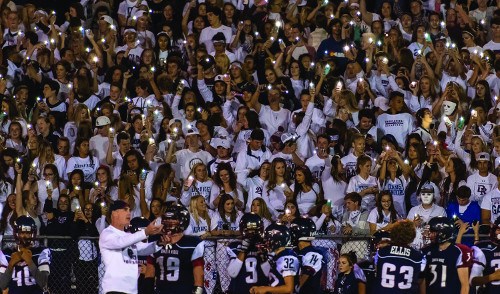 How are Super Fans rewarded for their dedication to the school and sportsmanship? Jefferson County School District provides Dakota Ridge High School with League passes that allow the Super Fans entry into games and events for free. For many of the events, Super Fans are also provided dinner and preferred parking in the Senior Lot, and they are the first students to get their yearbook.

In addition to a school’s athletic teams, one of the most important teams can be the Super Fans. These students can assist a school’s effort to promote sportsmanship, crowd interaction and involvement in every aspect of high school activities and sports.

Matt Heckel is the athletic director and assistant principal at Dakota Ridge High School in Littleton, Colorado. He is a member of the awards committees for the National Interscholastic Athletic Administrators Association and the Colorado Athletic Directors Association.