Focus on Health of Pitchers Continues in High School Baseball 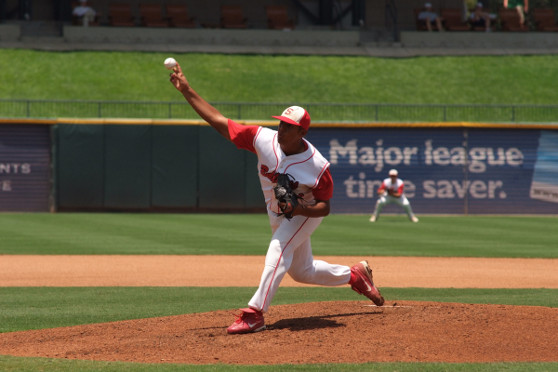 From youth leagues to high schools to the major leagues, protecting the health of baseball pitchers has been evolving for many years. In addition to examining arm mechanics and keeping them from running the bases, limiting the amount of pitches is the latest trend in the sport.

Gone are the days when Major League Baseball (MLB) pitchers threw an unlimited number of pitches in a game and worked more than 300 innings a year. Pitch counts have become an increasingly popular tool to measure a pitcher’s workload. At the professional level, when starting pitchers reach the seventh inning or approach 100 pitches, the call is made to the bullpen.

At the high school level, with risk minimization being a key principle of all NFHS playing rules, the NFHS Baseball Rules Book includes an article mandating pitcher protection. Rule 6-1-6 states: “Each state association shall have a pitching restriction policy to afford pitchers a reasonable rest period between pitching appearances.”

In most states, restrictions are based on innings pitched and required rest days. For example, one state limits a pitcher to nine innings in one day, but not more than 15 innings in any seven-day period. Rest days are determined by the number of innings pitched in a day.

Although Vermont currently is the only state that has a pitch-count restriction, Colorado has approved a policy for next year and several other states, including Maryland, Delaware and Florida, have proposals in the works or have had initial discussions. (See Around the Nation map, page 11.)

Elliot Hopkins, NFHS director of sports and student services and liaison to the Baseball Rules Committee, believes states should decide what restrictions work best for their players, but some type of limitation is important for the health of young pitchers.

“These kids are still developing,” Hopkins said. “We owe it to them to provide their coaches and administrators with the best up-to-date practices.”

To that end, the NFHS will host an arm-care initiative in June. Held at the conclusion of the annual Baseball Rules Committee meeting, Hopkins plans to have representatives from state associations, USA Baseball, MLB and the NFHS Sports Medicine Advisory Committee discuss different pitching restrictions and arm care.

“We want our membership to know what’s available and to walk away evaluating their current policies,” Hopkins said.

The Michigan High School Athletic Association (MHSAA) has an outs limitation for pitchers, but has discussed the possibility of a pitch-count limit.

“Our baseball committee has discussed the issue a great deal recently,” said Mark Uyl, MHSAA assistant director. “While one could argue that a pitch count would be a better measure of the stress on a pitcher’s arm and body, we’ve found many challenges in moving to pitch counts over limits on innings.”

Uyl said those challenges include whether pitch counts can be tracked easily and who keeps track. While a solution would be to have a scoreboard with a visible pitch count, that puts new costs on a school to update or modify their scoreboards.

“How do you regulate a pitcher that reaches his limit, but his coach moves him to catcher, where he throws just as many times as the pitcher? That’s another tricky part of the problem.”

Vermont adopted its policy in 2008, which states that a pitcher cannot throw more than 120 pitches during one outing, and must have three calendar days of rest if more than 75 pitches are thrown.
Jeff Stetson, the baseball coach at Mount Abraham High School in Bristol, Vermont, is a member of the state’s baseball committee that instituted the rule. He said it was adopted because the committee didn’t think the previous innings limit was working well.

“Pitchers were still throwing a ton of pitches. It was unhealthy for kids and didn’t make sense,” Stetson said. “Our goal was to come up with a system that works with reasonable pitch limits. It’s worked very well.”

Stetson said there was very little pushback from coaches for the new rules. The biggest hurdle was deciding who would track pitches during games. In order to keep umpires’ focus on the game and not pitch counts, it was determined that an adult from each team would keep track of each pitcher’s total and confer at the end of each half-inning on the number thrown.

Even though many coaches already employed some form of a pitch-count limit, Stetson believes having a rule eliminates any question about when to take a pitcher out.

“I had to go get a pitcher in the top of the seventh inning of a state title game because he had reached his limit,” he said. “I did not think that the rule was going to cost us a state championship. I just did it because that’s the rule.

“I hear stories of kids having Tommy John surgery younger and younger,” he said. “We’re in a small state, but I haven’t heard of any pitcher in our area that has had the surgery.”

Bert Borgmann, assistant commissioner of the Colorado High School Activities Association (CHSAA), thinks that more states will take a look at pitch-count limits in the future. The CHSAA will become the second state to institute limits next year.

“Pitchers at every level except high school are on pitch counts. This is the natural progression,” Borgmann said. “And, Colorado wanted to do something to stay out in front of the issue.”

The CHSAA created an ad hoc committee to study the feasibility of pitch counts and other risk minimization efforts for pitchers. The committee, comprised of coaches, physicians, athletic trainers and athletic directors, found that many coaches in the state were already incorporating pitch-count limits. The CHSAA’s limits vary slightly from the Pitch Smart guidelines.

“We know that some adjustment will be needed once more research is done,” Borgmann said. “The committee wanted coaches to be able to work with kids they know and make these decisions.”

In addition to implementing pitch-count limits, the committee created a series of recommendations for coaches. It suggested that coaches expand their pitching staffs to teach more players the correct way to pitch, and to improve communication between high school coaches and club coaches about pitchers’ workloads.

“Our coaches only have control over a pitcher for about 25 percent of the year,” Borgmann said. “If a player is working out for a club coach on Sunday during the season, the high school coach needs to know that.”

Whatever method is used to help protect young arms, it’s clear that pitchers will continue to be closely watched.

Chris Boone is the NFHS Assistant Director of Publications/Communications.