How to Become Involved in NFHS Network School Broadcast Program 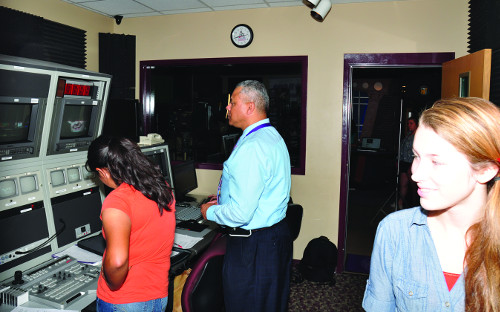 Heading into its third year, the NFHS Network is continuing to grow and deliver the high school experience to more and more viewers every season. Launched on August 1, 2013 in collaboration with PlayON! Sports, the Network now has 37 of the 51 NFHS-member associations as long-term partners, as well as six additional states that are providing content on the Network.

Last school year alone, the Network streamed content from 47 different states in 27 sports and activities, and in total broadcasted more than 27,000 events on www.NFHSnetwork.com.

A significant factor in the expansion of the Network has been the School Broadcast Program (SBP), which last year gave more than 1,400 schools the opportunity to produce and stream live content for the Network. Schools that become part of the SBP can showcase not only their school’s athletic events, but any school activities ranging from band competitions to graduation ceremonies.

The SBP also gives students interested in production and broadcast journalism a chance to gain experience and display their talent on the national stage, something that was largely unavailable to them previously.

“Because of the opportunities that the SBP affords students, I think the next Bob Costas or Robin Roberts could be even better,” said Mark Koski, NFHS director of sports, events and development and NFHS program administrator for the Network. “These talented kids are able to pick up broadcasting at an earlier age, so by the time they get to college they could already have four years of valuable experience.”

Being part of the SBP can be very rewarding for schools as well, and getting started is a simple process that is of no cost to the school. After contacting the Network, a school will receive a starter kit that includes the necessary software that it needs to begin streaming content. Schools only need to provide a computer, camera and an Internet connection to get started with the Network’s free software.

“We want the process to be as easy as possible for any school in the country,” said Mark Rothberg, vice president of PlayON! Sports and the School Broadcast Program. “Our software can work with equipment the school already has, so getting involved with the Network is just a matter of plug and play.”

All this comes to the school for little to no cost because of the system that requires viewers to purchase a pass to watch events on the site. The revenue from the pass model not only subsidizes the costs of buying equipment, but allows the school to turn a profit as well. Schools receive at least 50 percent of the proceeds from school-produced live events. Additionally, schools keep all of the advertising revenue that they are able to generate on their own through the sale of sponsorships.

Those schools that participate in the SBP can also be recognized for their excellence on the national level. Each year, the Network acknowledges Select schools and Elite schools as part of its recognition program. This year, the Network also handed out awards at its inaugural NFHS Network Broadcast Academy in Atlanta, including honors for best overall school program and best student broadcaster.

“What we see from our best schools are teachers who really push the boundaries of broadcasting to help their students gain an edge,” Rothberg said. “The School Broadcast Program not only exponentially grows the content for the NFHS Network, but gives students more opportunities to learn and get involved in high school sports.”

Schools interested in joining the School Broadcast Program are encouraged to contact the NFHS Network at SBP@NFHSnetwork.com.