Minnesota Man is More than Just a Coach 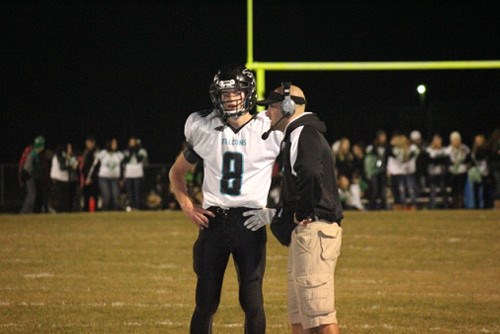 At Atwater-Cosmos-Grove City (ACGC) High School in Grove City, Minnesota, David Blom is redefining what it means to be a football coach.

“Definitely not,” said senior running back and co-captain Beau Anderson when asked if he had ever had a coach like David Blom. “He’s different but in a good way. He coaches us on and off the field.”

Blom, who was part of the ACGC team that won the Minnesota State High School League Class 2A state title in 2001, returned to his alma mater not just to coach football, but to try to make an impact off the field by teaching his players invaluable real-life lessons. Accountability, caring and respect are just some of the core values that Blom tries to instill in his players every day.

“As a coach, it’s so easy to just say things, but it’s harder to actually get that right message across,” Blom said. “I just try to shape my players into better people while I have the chance, and hopefully make the world a better place for my own children.”

In just his second season at the helm of the Falcons’ football program, Blom keeps finding unique and unconventional ways to make sure those lessons he teaches resonate with his players. This fall, Blom had his team hand-write thank you letters to their parents after discovering that few of his players had told their parents they loved them that week. That exercise was just the latest method Blom has used to ensure that the message hits home.

During one practice last year, Blom held a mock trial in which each player had to pretend that they had been drinking and driving and had killed the coach’s daughter in an accident. The players read their letters of apology in front of the whole team and the coach, in what many described as the scariest thing they had ever had to do.

“That drinking and driving lesson really opened our eyes,” Anderson said. “Because of Coach Blom, we know we have to focus on what’s truly important.”

At every practice, Anderson and his teammates never know what their coach has in store for them next. In a more lighthearted lesson this season, Blom wanted to make sure his players knew the importance of showing respect and appreciation for women. The result this time was not a heartfelt thank you letter, but rather a lip-sync video.

Blom and the team danced and lip-synced along to One Direction’s “Beautiful,” at one point holding up pictures of their mothers. While unconventional, putting his 41 players in the spotlight and even embarrassing them just a little made the message crystal clear: every woman deserves to be told she is beautiful.

While the ACGC players may have come to expect such atypical teaching methods from Blom, people around the nation have been more surprised to see a football coach go the extra mile in order to teach his players lessons away from the gridiron.

The lip-sync video, which has gathered thousands of views on YouTube, has brought some rarely seen attention to the small Minnesota school. People from around the nation have contacted Blom and the school to show their appreciation for what he is doing for his players. Blom attributes the response to the pessimism that he sees throughout the media in this day and age.

“There just seems to be negative stories in the news all the time, or when you hear about a school it’s always all about the sport,” Blom said. “If I can make these boys meet my standards for being my son-in-law, then I think they’re ready to go out into society and make it a better place.”

Such recognition on a large scale would not be possible if the players themselves didn’t buy in to his philosophy as both a mentor and coach. Ever since taking the job last fall, Blom has won his player’s trust and respect with his energy and creativity, according to ACGC principal and superintendent Sherri Broderius.

“The boys have captured David’s excitement and passion for helping them understand the importance of caring for people in their lives,” Broderius said. “Because they respect him, he is able to take that learning to the next level with more abstract thoughts that go beyond the Xs and Os of the game.”

That trusting relationship between Blom and his players seems to be the key to what is happening in Grove City.

“We’re very comfortable with Coach Blom because we know he cares about us even in the offseason and wants us to become better people,” Anderson said. “With him, football is more than just a sport, and I think that’s a good coaching style.”

For Blom, he isn’t afraid to match his student’s energy on a daily basis and treat them more like equals.

“There’s a big difference between being a boss and a leader,” Blom said. “As their leader I try to be hands-on and expose myself to challenges. I’m not above getting my hands dirty. Since I’m pretty outgoing with them, they open up to me.”

What Blom hopes to do is truly enrich the high school experience of his players and prepare them for life with lessons that transcend football, regardless of whether or not it remains a part of their lives in the future.

“Not many of our students will play in college, but David is preparing them for everything they can do in life. He is guiding them to being responsible, honest and caring young men. No matter what you do you need those things,” Broderius said. “That’s what’s most important, rather than being great football players. David counts on them in turn to take these lessons and use them elsewhere in life, and the kids get that.”

With Blom dedicating so much energy to matters off the field, one might expect to hear some calling for the coach to focus more on getting results on Friday nights. However, that type of backlash has never come from parents or anyone else in the community according to Broderius.

“The lessons he teaches them are reinforcing what parents or other adults have always told them. Hearing those things from someone other than mom or dad is what makes it click. Our parents are very proud that their sons play for David. What parents wouldn’t be?”

As for what he has in store for his players in coming seasons, Blom wants to cover important topics such as consent and peer pressure. As he continues his mission as mentor and coach, there are sure to be more surprises on the way for the young men at ACGC.