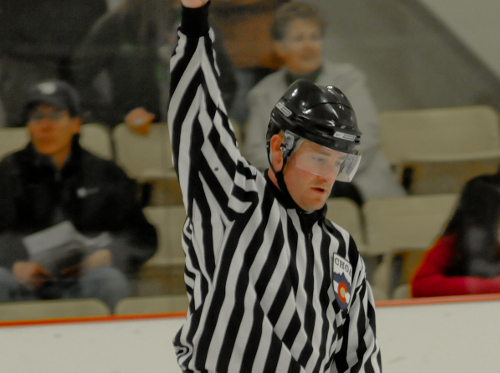 In an effort to minimize risk of injury in high school ice hockey, the penalty structure has been revised to provide options for more stringent penalties when situations warrant.

The reformatting of penalty changes and revisions to four other rules were recommended by the National Federation of State High School Associations (NFHS) Ice Hockey Rules Committee at its April 27-28 meeting in Indianapolis. All 2015-16 ice hockey rules changes were subsequently approved by the NFHS Board of Directors.

In the past, cross-checking, elbowing, goalkeeper contact, kneeing, slashing, tripping and roughing had options for a two-minute minor or five-minute major penalties. These violations now will include an option for game disqualification.

“The health and safety of students has been and continues to be at the forefront of discussion for the Ice Hockey Rules Committee,” said Bob Hayden, chair of the rules committee. “In the past, the penalty structure has affected calls made on the ice. The committee believes this penalty structure will allow officials to make the proper call and penalize the offending player accordingly by rule.”

Language regarding player equipment in Rule 3-4 was revised to reflect current trends. Equipment previously recommended such as padded pants, shin pads, elbow pads, shoulder pads and protective cup will be listed as required equipment since players are no longer skating without these essential items.

In accordance with other NFHS rules, a new Rule 3-8 was added stating that electronic devices shall not be used by team personnel or spectators to communicate with on-ice players or goalkeepers during play.

In addition, the 2015-16 Ice Hockey Rules Book will be reformatted to divide the current Rule 6 – Playing Rules – into four separate rules. Rule 6 will now be Participant Conduct, followed by Rule 7 (Physical and Stick Fouls), Rule 8 (Other Fouls) and Rule 9 (Game Flow).

A complete listing of the ice hockey rules changes is available on the NFHS website at www.nfhs.org. Click on “Activities & Sports” at the top of the home page, and select “Ice Hockey.”

According to the 2013-14 NFHS High School Athletics Participation Survey, there are 35,393 boys participating in ice hockey in 1,585 schools across the country, and 9,150 girls playing the sport in 612 schools.