Editor’s Note: This is the second of a two-part series addressing the challenges of mental-health issues in high school athletics. The first article in the February issue presented an example of how a single high school addressed these challenges. This article explores a statewide approach to this important and difficult subject.

Suicide is a serious public health problem. It is the second leading cause of death of high school-aged individuals in the United States. (National Vital Statistics Report 2016 Data Published by the CDC July 2018) In Oregon, the suicide rate is higher than the national average, and a recent survey of 11th graders found that within the past year, 18 percent seriously considered suicide and seven percent attempted suicide. (Youth Suicide Annual Report 2017 & Oregon Healthy Teens Survey 2017)

More concerning is the fact that the rate of completed suicides in youth has been increasing since 2011. (Youth Suicide Annual Report 2017) Not only does suicide lead to a life lost much too early, it leaves a devastating impact on those left behind.

Fortunately, suicides are preventable. The Oregon Youth Suicide Intervention and Prevention Plan was created calling for “Zero Suicide...through collective action among health and behavioral health systems, schools, communities, parents and other systems that touch the lives of youth.” (Youth Suicide Annual Report 2017) For numerous reasons, schools are being used as the primary means of dissemination and implementation of suicide prevention interventions.

One group of school personnel that had not been traditionally considered in schoolbased efforts are school activities personnel such as coaches, athletic trainers and athletic administrators. These individuals spend a great deal of time with students, allowing for the development of relationships that may go beyond what a student typically has with a teacher.

Coaches, athletic trainers and athletic administrators are in the ideal position to recognize behavioral warning signs or be the point person for students to go to if they have concerns about a peer. This is vital as youth considering suicide often talk about suicide and exhibit behaviors and/or moods associated with increased suicide risk. (Suicide Prevention Campaign Article #1) Additionally, activities personnel are school leaders who are often known and trusted by parents, thus creating more opportunities for dialogue on suicide prevention. (Suicide Prevention Campaign Article #5)

Realizing the impact youth suicide has on school communities and the prevention opportunities that exist, the leadership of the Oregon School Activities Association (OSAA), the Oregon Athletic Coaches Association, the Oregon Athletic Directors Association and the Oregon Athletic Trainers’ Society partnered to promote the role of high school activities personnel in preventing youth suicide. While these groups had multiple means of reaching out to the intended audience, the leadership realized help was needed from experts for a statewide education campaign to be successful. The Suicide Intervention Coordinator for the Oregon Health Authority (the state agency charged with overseeing Oregon’s health-related programs) was contacted and agreed to assist in developing a statewide educational campaign geared to activities personnel.

It was determined that a series of articles geared specifically to activities personnel would be written by the Oregon Health Authority and then disseminated by the OSAA throughout the academic year. The articles were:

The articles typically contained two pages of practical information and tips. The campaign was not designed to replace a formal suicide gatekeeper training, rather it served to promote awareness of the role activities personnel play in countering the rising problem. The articles and additional resources were also posted to the OSAA website.

The OSAA Foundation provided funding for a poster that was provided to schools to be placed in locker rooms, team rooms, athletic training rooms and other areas where students congregate. The primary goal of the poster was to provide students with contact information for crisis lines.

Toward the end of the campaign, workshops were presented by a representative from the American Foundation for Suicide Prevention at the Oregon Athletic Directors Association’s annual statewide conference. The goal was to provide information on programs and policies that athletic administrators could implement at their schools.

While the campaign only spanned the 2017-18 academic year, the leadership of the stakeholder groups believed there was still more that could be done. This academic year, a campaign on anti- hazing and anti-bullying (which is a risk factor for suicide) has been implemented using a similar approach as the suicide prevention campaign.

In addition, this past summer the groups coordinated a high school coaches’ symposium that included breakout sessions on suicide prevention, hazing prevention and character education. The groups have also continued to work with the Oregon Health Authority to develop additional suicide prevention resources for school personnel. Additional resources are under development and will be rolled out to schools and school personnel when they are completed. 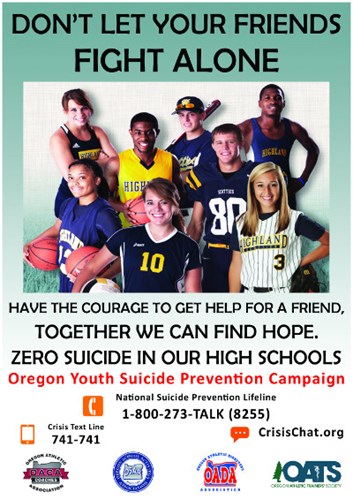 Those individuals who work with students involved with high school activity programs realize the power and opportunities the relationship with the student can have for positive character development. The focus of this campaign was to highlight a significant and growing public health problem – youth suicide. The goal of the campaign was to increase awareness and provide appropriate resources – not to create experts in suicide prevention.

The collaborative nature of this campaign strengthened the relationships between the different groups working together with a specific purpose. The groups have now partnered on several additional campaigns – the aforementioned anti-hazing/anti-bullying campaign and promoting the development and implementation of Emergency Action Plans. The unified voice coming from these organizations has been helpful when addressing these topics.

State public health officials were able to see the positive impact of participation in high school activity programs beyond just the activity itself – namely the positive mentorship relationships that may develop. They were also impressed by the large audience the campaign reached and the feedback provided (due to the expansive network of activities administrators, coaches and athletic trainers that the OSAA reaches). Ideally, this will spur additional collaborations in the future.

A major challenge for schools and school personnel is the competing demands for time and resources for the many worthy interventions and activities. Unfortunately, it is impossible to commit to all interventions and activities that may benefit students. While there was a monetary cost for the posters to be distributed to schools, development of the actual campaign articles and presentations were done by individuals as part of their job related to suicide prevention, so the campaign was relatively inexpensive. Since it was distributed throughout the year, it did not require a large time commitment from activities personnel and the monthly articles kept the issue front and center.

The statewide Youth Suicide Awareness Campaign is just one example of how the unique role of school activities personnel can be leveraged and how stakeholder organizations and state public health agencies can maximize their impact and reach through collaboration. While we will continue to review suicide incidence in Oregon during the coming years, the campaign is seen as a success at this point as it was relatively low-cost in terms of resource allocation, it strengthened relationships between the involved entities, and it promoted the role of coaches, athletic trainers and athletic administrators as mentors and trusted individuals to make an impact that extends beyond wins and losses.

Sam Johnson is a clinical associate professor in the College of Public Health and Human Sciences at Oregon State University. He is the Clinical Education Coordinator for the athletic training program. He currently serves as president of the Oregon Athletic Trainers’ Society and is a member of the Oregon School Activities Association Sports Medicine Advisory Committee. Rob Younger is in his ninth year as director of the Oregon Athletic Coaches Association. He began his teaching and coaching career in 1974, including 30 years at Sweet Home High School where he taught biology and coached 65 sport seasons, 40 seasons as a head coach. Peter Weber has been executive director of the Oregon School Activities Association since 2016 after 17 years on the OSAA administrative staff serving in a variety of capacities.