The weather in central Illinois was cold on December 19, 2009, but not so unreasonably so as to require extra layers of headgear. That was especially true in the warmth of LaSalle-Peru High School gym, where the Cavaliers boys basketball team would be hosting a game that evening. The extra attire that evening belonged to a large contingent of the student section and would lead LaSalle-Peru Principal Deb Nelson to make a decision that would cast a cloud on school spirit in the short-term, but set the tone for sportsmanship in the long-run.

Nelson recalls that the student section’s attitude had grown noticeably negative throughout the year, and that a difficult season on the court was leading to greater pessimism.

“It started in football, where I felt like I babysat. Every time I had to stop an inappropriate cheer I felt like a new one started,” recalls Nelson. “There was never energy and excitement toward our teams regardless of how strong we were; it always seemed to be about finding a way to be as negative as possible toward opposing teams – and sometimes even our own teams.”

As the student section filed in to the home basketball game that fateful evening, Nelson was immediately struck by students carrying and distributing large paper bags. It quickly dawned on her that the group was planning to imitate the gesture that can often be found in NFL stadiums late in the season for losing teams – fans wearing paper bags over their heads in shame.

Nelson approached the group and made it clear that anyone who donned a paper bag on their head would be ejected from the game. Most heeded her warning, but a group of about 30-40 students simultaneously put them on as the game tipped off.

“I am sure at the time they were thinking that there was no way we would actually kick them all out,” Nelson said.

However, she made good on her warning, rounding up fellow administrators to help escort the group from the building. 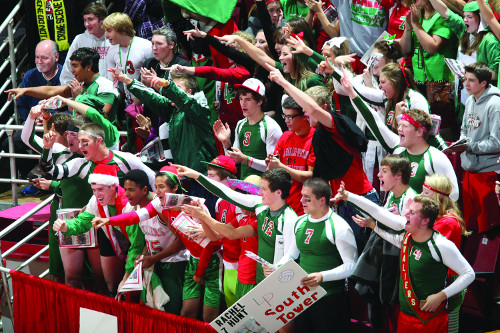 The administration met Monday morning and jointly decided that the group’s failure to comply would result in social probation and a one-month suspension from attending any extracurricular school events. That was an especially tough blow for the seniors, considering that the intra-city rivalry game against St. Bede Academy would occur during that stretch.

“I had mixed support from the parents, but the full backing of my superintendent,” Nelson said. “I am probably lucky that social media wasn’t as big then. I am sure I would have taken a beating.”

After about a week, the students asked Nelson for a meeting to discuss the incident and any chance of completing probation early.

“One of the best meetings I have ever had,” Nelson said. “The message had hit home. They got it.”

Getting it and getting back into games were two different things. Nelson and the students worked together to develop a series of requirements, including apologies and the development of a sportsmanship contract, that would have to be met before any consideration would be given to lifting the ban early.

“Every one of them completed their tasks,” Nelson said.

With the ban lifted about 48 hours early, the student section was allowed to return en masse for a raucous down-to-the-wire win over St. Bede in a game that also doubled as the birth of the newly named “Cavalier Crazies.”

Part of that new beginning was that the student section now had designated student leaders who worked with Nelson and the school athletic director in weekly meetings to go over dress themes and cheers for games.

“I won’t say they are perfect now, because they aren’t,” Nelson said. “We still have to say ‘no’ to some ideas, but things have improved so much. That whole episode was a turning point.”

And it appears there is no turning back. For example, when the Cavaliers girls’ volleyball team reached the IHSA State Finals in 2013, the result was one of the largest student sections the tourney had ever seen. The IHSA Sportsmanship Committee members, who discreetly observed the student-athletes, coaches, fans and student section throughout the course of the weekend, unanimously voted for the school to receive a Sportsmanship Banner, which now hangs in the school gymnasium where the infamous bag incident occurred. 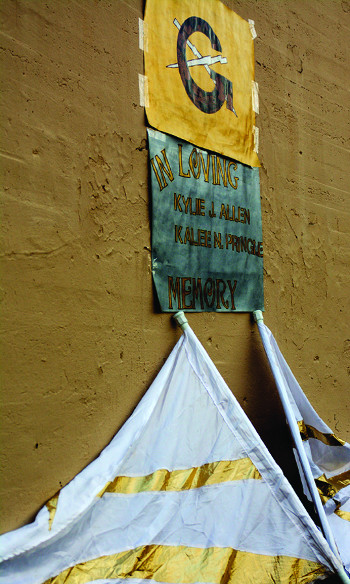 However, that isn’t Nelson’s proudest moment on this sportsmanship journey. That occurred as the school administration prepped to host a home football game against Galesburg last month. The school planned a special pre-game moment of silence to honor two Galesburg students who had recently been killed in a car accident. Nelson met with her student leaders early in the week to express the importance of being respectful for such a serious moment. The students took it upon themselves to do more. As the story spread among the student body, they took the initiative to pay tribute twofold. The deceased students had been members of the Galesburg color guard, so the LaSalle-Peru color guard put together a small memorial that included a pair of flags in Galesburg colors. Meanwhile, on game night amidst a reverently silent student section, the LaSalle-Peru band serenaded the Galesburg crowd by playing its fight song.

“It was really neat to see the kids take the initiative and to be pumped up about showing respect,” Nelson said. “We have come a long way from wearing paper bags on our heads. The kids want to win, but they understand the human side of it. There are bigger things in life than winning a football game.”

Matt Troha is assistant executive director of the Illinois High School Association and a member of the High School Today Publications Committee.