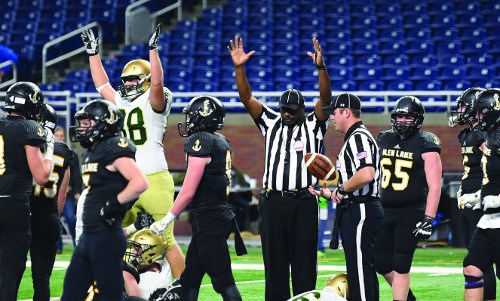 Willie Watson signals touchdown during the November 25 game prior to collapsing.

A 32-second response by Emergency Medical Technicians (EMT) was the difference in life or death for 68-year-old Willie Watson, who was spared from becoming another victim of sudden cardiac arrest.

Watson, a 38-year official for the Michigan High School Athletic Association (MHSAA), collapsed in the tunnel near the officials’ locker room after the MHSAA Division 6 Football Championship at Ford Field November 25 in Detroit. Fortunately for the Kalamazoo native, stadium staff members were steps away as he fell unconscious. Within seconds, their call for help reached on-site EMTs who swiftly made their way to him from the field.

“It was strange because I wasn’t sick or anything. I drove to the game by myself. Everything was fine, got dressed, and then went out on the field for the game,” Watson said. “After the game, I came to the locker room, had a boxed lunch, and the last thing I remember is leaving towards the tunnel. That’s the last thing that I remember. I woke up in the hospital the next day, on Saturday.”

Moments before Watson’s dire situation occurred, he stood in the officials’ locker room speaking with Mark Uyl, MHSAA assistant director. Uyl said when he received the call regarding Watson, he arrived to find paramedics administering full CPR, in addition to the use of an automated external defibrillator (AED).

“It was a scene right out of a movie,” Uyl said.

After about 10 minutes of work on Watson, Uyl said paramedics found a pulse and promptly transported him to Detroit Medical Center.

“Things were very critical that Friday night – very touch and go,” Uyl said. “Overnight we got reports that he was slowly improving.”

An implantable cardioverter defibrillator (ICD) was placed in Watson’s chest. The pager-sized device is battery powered and placed below the skin to monitor heart rate, according to the American Heart Association (AHA). If an abnormal heart rhythm is discovered, the ICD delivers an electric shock to restore a normal heartbeat.

“I got to witness an absolute miracle,” Uyl said. “If the cardiac situation doesn’t happen, literally at the feet of the medical staff that we have on-site at an event like that, he would’ve gotten up to the concourse or, heaven forbid, outside the building into the parking lot or his car and I believe it would’ve been a much more tragic ending.”

Watson was working the third game of the day as a line judge, and when he collapsed, was beginning to leave the facility and head to a local hotel reserved for MHSAA officials. Uyl told Watson how much of a blessing it was that he was assigned that game. At home or at the hotel, Watson would have been alone without access to proper medical attention.

“Certainly, where we got lucky is where he collapsed,” Uyl said. “We have emergency procedures, but when we’re at one of our college or pro venues, we often use the building’s plan. It could not have been more seamless between our staff and the Ford Field building personnel.”

At MHSAA events, such as those at Ford Field, an ambulance and two EMTs are stationed on the field next to the tunnel that connects it to the other areas of the stadium. Watson said he and fellow officials routinely confirm the location of emergency responders before starting a game.

“Schools almost always have somebody from a university around who does training. Most schools have ambulance service there at the site,” Watson said. “There have been incidences where we have had injuries that require them to come out onto the field to assist a student-athlete. It could be a concussion, a leg injury or who knows. We always have somebody at a venue.”

Equipped with his ICD, Watson left for home a week later from Detroit Medical Center. Expecting to make a full recovery, Watson said the only recommendations from his doctors were to tweak his diet and increase exercise. Although he said his recovery is on track, one of the most notable effects from his incident was memory loss.

An official in basketball, softball and volleyball as well, staying active won’t be too much of an issue for Watson, who said he took basketball season off to get himself better prepared for the upcoming softball season.

“It’s just amazing how quickly they responded in my situation. Regardless of who it is, the response time I received was tremendous,” Watson said. “I was out. They had to revive me. It only took them 32 seconds to get to me. Even if it’s an injured player on the field, response times are getting so quick.”