As a kid growing up in Joliet, Illinois in the 1980s, it became apparent early on that there were generally three things that people who had heard of my hometown associated it with:

The latter is Gordon “Gordie” Gillespie, who passed away on February 28, 2015 at the age of 88. Gillespie was inducted into the NFHS National High School Hall of Fame in 1989.

Everyone in Joliet “knew” Gordie, but I had the distinct pleasure of being coached by the man whose legendary high school coaching career was followed by a second act that saw him win more collegiate baseball games (1,893 at Lewis University, Ripon College, University of St. Francis) than any coach in history (before being surpassed by University of Texas coach Augie Garrido in 2014).
Amazingly, Gordie amassed 2,402 coaching victories in three sports (football, basketball and baseball) during a 61-year career. 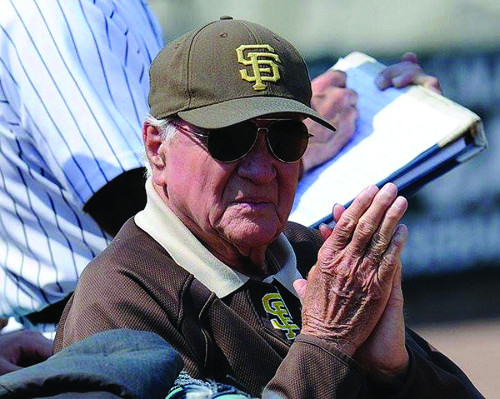 Wins, however, were not what drove Gordie, which he eloquently expressed during an interview late in his life, simultaneously reflecting on his career and mortality: “When I’m standing at the gates trying to get in, He’s not going to ask me how many games I’ve won.”

Gordie’s indelible impact on high school sports began at Joliet Catholic High School in 1951, where he went on to lead the Hilltopper football program to five Illinois High School Association (IHSA) state titles (in the 13 seasons that the IHSA playoffs existed during his tenure) before moving on to start the football program at Joliet’s University of St. Francis in 1986.

Gordie “retired” to Ripon, Wisconsin in 1996, joining his son, Bob, who was the athletic director and head basketball coach at Ripon College. In the meantime, the Joliet Catholic football coaching reigns had been passed down to a pair of Gordie’s longtime assistants, resulting in two more state titles as the program remained one of the state’s most respected. Eventually, however, the football program lost some of its luster. Now Joliet Catholic Academy (JCA) after a merger with the all-girls St. Francis Academy, JCA failed to make the IHSA football playoffs for the first time in school history in 1997 and was upset early in the 1998 postseason.

I was finishing my junior year of high school in the spring of 1999 when the news broke. Gordie was returning as an assistant football coach, helping third-year coach Dan Sharp, who had played for and coached with Gordie at both Joliet Catholic and St. Francis. There was an aura that surrounded the man, and a confidence that permeated from our team when we found out he would be on our sideline.

One might expect that Gordie came with a magic playbook full of formations and schemes that were years ahead of opposing coaches. Ironically, Joliet Catholic had run, almost exclusively, the same handful of buck series plays from the double-wing formation that Gordie had installed during his tenure dating to the 1950s. Gordie’s magic wasn’t necessarily in his innovation, but rather his ability to teach and motivate.

Gordie made it clear from the get-go that it was Coach Sharp’s team as he worked quietly with the quarterbacks and running backs in drills and did his best to stay behind the scenes. However, late in camp, with the rest of the coaching staff unavailable due to a faculty institute day, Gordie singularly led a practice with offensive players only. It was a stifling hot August day and I can recall being a bit worried about whether it was healthy or even safe for the then 73-year-old to be outside, much less leading a practice by himself. That was when we got to see what defines legends.

The man whose safety I had feared for 15 minutes before was now playing quarterback just a few yards away, parroting each play at full speed with his own imaginary offense. He pushed our tempo to new levels, demanding that we carry out fakes and finish blocks as he did the same. Somehow as we got winded, he managed to remain unfazed. We laughed and we marveled, but most of all we shared the understanding of what made this man such a special coach. And he wasn’t done!

Our team had started 3-0 against good competition, but I had played subpar, struggling with the adjustment to the speed of the varsity game while also playing guard for the first time on the offensive line. Despite my lack of confidence, I felt like I had played well in a Week 4 victory.

As I was heading into an afternoon class the following Monday, I was greeted by an unusual sight. An excited – and visibly hurried – Coach Sharp tracked me down in the hallway to see if I had a few minutes to chat in his office. When I made it to his office, Coach Sharp shared that he had been on the phone with Gordie earlier that day, and that he wanted to tell me that “this game film was what they should use to teach future guards at JCA how to play the position” or something to that effect. 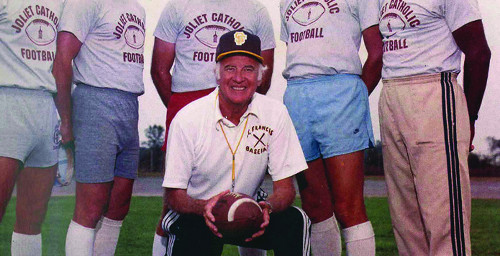 Of course that wasn’t true. Sure I had played well, but this was not about future guards. It was about recognizing that I was in a slump that Gordie believed was more mental than physical and he was going to try to build me back up. It worked! My teammates and I played 10 more weeks of football, culminating with an undefeated IHSA Class 4A state championship. To be honest, I don’t have any other Gordie memories from that season and can’t recall if he even attended the celebration that night after we won state. He never wanted to be the focal point.

Yet years later, that phone call still is for me. I have never shared this story with anyone before – mainly because a story about not taking a phone call from a man I only knew for five months is pretty unspectacular.

When Gordie passed away, I found that many others had received similar calls from this coaching legend – not on the phone mind you, but in the small gestures of kindness and caring that he provided. Social media was abuzz with anecdotes from players and coaches talking about Gordie “treating people like gold,” “molding me into the man I am today” or the time he said he would “walk to Greenville (Illinois) to speak at a coaches clinic.”

I don’t know where Gordie Gillespie sits on the current list of recognizable Joliet icons, but for me, his place on the list of the greatest coaches of all-time is an easy call.

Matt Troha is assistant executive director of the Illinois High School Association and a member of the High School Today Publications Committee.