The Challenge
The 2013 Youth Risk Behavior Surveillance Survey, the most recent study by the Centers for Disease Control (CDC) summarizing data from the national, state and local levels across the United States regarding the leading causes of injuries and death among young people, concluded that six categories of priority health risks exist for youth and young adults ages 10-24.

The first category examined in the study – behaviors inflicted against individuals leading to physical or psychological harm, violence or death – included traditional, in-person bullying and its newer manifestation, cyberbullying. The data indicated that during 2013, 19.6 percent of high school students had been the victims of in-person bullying on school property and 14.8 percent of students had been subjected to electronic bullying through social media, texting, email, voicemail, chat rooms, instant messaging or websites. 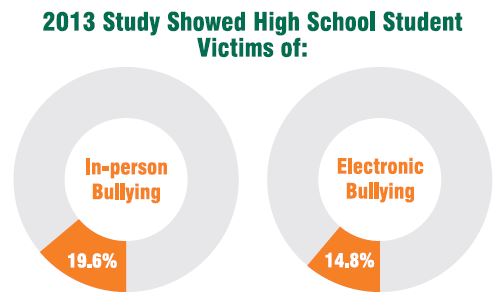 Cyberbullying manifests itself in ways that often makes it more difficult to address than physical bullying, including the anonymity afforded to individuals using pseudonyms for postings or setting up “fake” social media accounts, the lack of normative constraints on bullies hiding behind such anonymity, the irrelevance of physical strength to the bully’s ability to attack and psychologically injure the victim in cyberspace, the ubiquity of social media communications among young people who often maintain an obsessive focus on their devices (especially cell phones), and the ability of the cyberbully to intrude into the one safe environment where victims of bullying historically have been able to seek sanctuary – their homes.

The challenge for school administrators and state legislators struggling to enact school policies and state laws that effectively address the problems associated with in-person and electronic bullying is that, although physical bullying on campus is clearly within the jurisdiction of educational institutions, cyberbullying typically originates off-campus via technology owned by students (computers, tablets and cell phones) and the legal authority of schools to sanction off-campus communications using privately-owned devices is limited by the First Amendment free speech rights of the perpetrators.

People of the State of New York v. Marquan M.

In July 2014, the New York Court of Appeals, the state’s highest court, held that the language of a 2010 Albany County law criminalizing cyberbullying was “overbroad and vague” and was therefore an unconstitutional infringement of the First Amendment freedom of speech rights of a high school student who had pleaded guilty to violating the law.

The Albany County Legislature enacted its cyberbullying law because of perceived defects in a state law adopted by the New York Legislature, the Dignity for All Students Act, prohibiting bullying on school property or at school functions and directing the creation and implementation of school board policies designed to reduce bullying in schools. The statewide law did not criminalize bullying; instead, it focused on educational efforts and sanctions by schools such as detentions and suspensions. In contrast, the Albany County law affirmatively criminalized bullying and incorporated a new crime – the offense of cyberbullying – a misdemeanor punishable by up to a year in jail and a $1,000 fine, with cyberbullying defined as:

“any act of communicating or causing a communication to be sent by mechanical or electronic means, including posting statements on the Internet or through a computer or email network, disseminating embarrassing or sexually explicit photographs; disseminating private, personal, false or sexual information, or sending hate mail, with no legitimate private, personal, or public purpose, with the intent to harass, annoy, threaten, abuse, taunt, intimidate, torment, humiliate, or otherwise inflict significant emotional harm on another person.”

Less than a month after the Albany County law was enacted, Marquan M., a minor attending Cohoes High School, created a Facebook page using the pseudonym “Cohoes Flame” and anonymously posted photographs of classmates with detailed, vulgar and highly offensive descriptions of their alleged sexual predilections, sexual exploits, sexual partners and other forms of falsified personal information. Because of the highly sexualized nature of the postings about underage students, a police investigation ensued, leading through a trace of its IP address to the discovery that the Facebook page’s creator was Marquan, who admitted his involvement and was charged with cyberbullying under the new local law. He pleaded guilty but reserved his right to appeal on the free speech issue and after a lower court upheld the local law’s constitutionality, the New York Court of Appeals agreed to hear the case.

The state’s high court struck down the Albany County law as a violation of the Free Speech Clause of the First Amendment because its definition of cyberbullying was overbroad – in addition to prohibiting bullying behaviors, it also restricted a wide array of protected types of expression and effectively banned a broad range of online political commentary that might be appropriately targeted at government officials or corporations. The high court also found that the Albany County law was vague because it did not give adequately precise notice to the public of the specifically proscribed language and conduct that was being criminalized. The court noted that the local law was motivated by the laudable public purpose of shielding children from cyberbullying, but that the statute needed to be rewritten more narrowly to focus solely on criminalizing sexually explicit photographs and information designed to inflict emotional harm on children.

Rosario v. Clark County School District
In July 2013, a federal court in Nevada refused to dismiss a free speech claim by a student who had been suspended for violating his school’s cyberbullying policy. Rosario was a varsity basketball player at Desert Oasis High School who was initially cut from the team, but was placed on the squad following protests by his father about tryout procedures. Following the last game of the season, Rosario used his Twitter account to post eight lewd, vulgar and profanity-laced tweets about school administrators and his basketball coaches.

After a hearing and an appeal, Rosario was reassigned to another high school for violating the district’s cyberbullying policy which included language from a Nevada state law stating:

A member of the board of trustees of a school district, any employee of the board of trustees, including, without limitation, an administrator, principal, teacher, or other staff member, or any pupil shall not engage in bullying, cyberbullying, harassment or intimidation on the premises of any public school, at an activity sponsored by a public school or on any school bus.

Rosario’s family then filed a lawsuit, asserting violations of the young man’s due process rights, equal protection rights, search and seizure rights, privacy rights and free speech rights. Following a motion by the school district for summary judgment, the court dismissed all of the claims except for the plaintiff’s First Amendment argument. The court determined that one of the tweets was obscene and therefore not entitled to any free speech protection. However, the other seven tweets, despite being in the words of the court “racist, violent, offensive and hateful,” were held to not satisfy the legal definition of obscenity. The issue in the case then became whether the school had the authority to discipline a student for the non-obscene, off-campus speech contained in those seven tweets.

The court stated, “[i]t is well established that schools may discipline students for off-campus speech in certain situations” and emerging case precedents nationwide have established the legal standard that “school officials have the authority to discipline students for off-campus speech that will foreseeably reach the campus and cause a substantial disruption.” Therefore the court refused to dismiss Rosario’s First Amendment claims related to the seven non-obscene tweets and ruled that a full trial on the merits was warranted to determine whether an on-campus substantial disruption was a reasonably foreseeable outcome when the tweets were posted and whether an on-campus substantial disruption had in fact occurred.

Some basic principles have emerged from the growing body of case law addressing the authority of schools to discipline students for off-campus digital communications used to cyberbully other students.

Lee Green is an attorney and a professor at Baker University in Baldwin City, Kansas, where he teaches courses in sports law, business law and constitutional law. He is a member of the High School Today Publications Committee. He may be contacted at Lee.Green@BakerU.Edu.