As high school basketball competition begins to wind toward state tournaments across the country, these events in most states are contested without the use of a shot clock.

For a number of years, proposals to implement a shot clock have been defeated by the National Federation of State High School Associations (NFHS) Basketball Rules Committee. With about 18,000 high schools offering girls and boys programs, the arguments against the use of a shot clock have prevailed.

Interest in the shot clock, however, has led eight state associations to permit its use. Currently, Massachusetts, Maryland, Rhode Island, Washington, New York, California, North Dakota and South Dakota utilize the shot clock for either boys or girls or both. Since there currently is no allowance for a shot clock under NFHS rules, these states forfeit opportunity for service on the Basketball Rules Committee.

A few other states have indicated an interest in the shot clock if NFHS rules permit its use, but many states believe the game should remain different from the college and professional levels.
Kentucky High School Athletic Association (KHSAA) Commissioner Julian Tackett has multiple reasons why his membership doesn’t adopt the shot clock, including the lack of a national rule and the fact that the KHSAA is a membership-driven organization and it hasn’t heard a strong outcry from schools wanting to change. 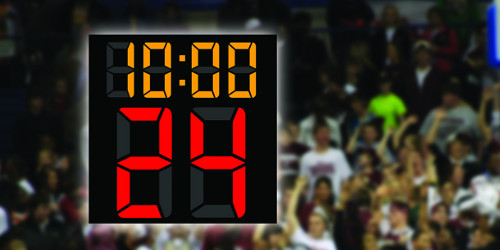 There are also financial, personnel and philosophical questions that are legitimate front-burner issues. Unless the NFHS makes a national rules change, Kentucky likely won’t see a state adoption unless its membership proclaims a need.

Theresia Wynns, director of sports and officials education at the NFHS, said there have been a couple of proposals during her three years as staff liaison to the Basketball Rules Committee. Since the NFHS Basketball Rules Book addresses both boys and girls basketball, the proposals have been inclusive of both genders.

The arguments against the rule, Wynns said, include:

• The high school game does not need the shot clock. It is in good shape as it is.
• A shot clock takes away strategy from some coaches to slow the ball down to match up to the opponent.
• Some committee members are opposed to “state adoption” because everyone should be playing the same game.
• Education-based basketball does not warrant that student-athletes and coaches play to entertain the public.

“It is difficult to forecast what a committee might do,” Wynns said. “We have individuals each year who speak eloquently about the use of the shot clock. They have not be able to convince a majority of the committee to vote positively for the shot clock.”

Several states use the shot clock for various reasons and have highly attended state tournaments because of that element of the game, Wynns said.

Washington was among the most recent to make the change as it installed a 35-second shot clock in the spring of 2009 in boys basketball. The 2009-10 school year was the first season of implementation.

“The game itself is essentially the same, with or without a shot clock,” said Cindy Adsit, Washington Interscholastic Activities Association assistant executive director. “The shot clock eliminates the possibility of a team running a spread offense, also known as stalling.”

Adsit said that a 30-second shot clock has always been in effect for girls in her state. Washington schools adopted NFHS basketball rules for girls in the early 1980s, but it continued to use the shot clock based upon prior arrangements.

St. Bernard (Ohio) Roger Bacon boys basketball coach Brian Neal coaches in a state where the shot clock isn’t used but said he would be “shocked if I didn’t see it eventually.”

He realizes the administrative challenges associated with finding a good clock operator, being able to reset the shot clock in an effective manner and the cost of installation in most school districts would be an uphill climb.

Still, as a coach, Neal is in favor of the shot clock and says it would encourage more teams to play with pace.

“We actually have played in a holiday tournament in New York where a shot clock was used,” Neal said. “The week before we really tried to make sure we were prepared for their 35-second shot clock. Once there, we realized that it hardly ever came into play.”

Liberty Township (Ohio) Lakota East girls basketball coach Jill Phillips said money is probably one of the biggest reasons the shot clock has not been implemented in more schools.

“It does take away the ‘stall’ game if a team feels it is at a huge disadvantage to another team,” Phillips said. “But in a lot of ways, it creates a more even playing field. Teams can play whatever defense they choose to play versus getting behind and being forced to play man to man because the other team can hold the ball. It completely changes close games at the end of games.”

Coaches may enjoy the opportunity but administrators are hesitant to create another possible challenge to a high school gym.

Shot clocks range from $2,000 for a basic model mounted to the backboards to $5,000 for one attached to the scoreboards, according to a Columbus Dispatch report in August 2013.

Adsit believes the shot clock will never be accepted by a majority of the NFHS member states for a variety of reasons, but the primary one being finances.

“I would be honest with you,” Snodgrass said. “I wouldn’t mind seeing (the shot clock). But, I think wanting it and administrating it are two different things.”

The cost factor in Kentucky cannot be underestimated, Tackett said.

“In recently constructed gyms, it might be easy to retrofit and add clocks,” Tackett said. “However, in the vast majority of our schools, the facilities are old enough to where adding properly placed clocks would be a very costly addition.”

Wynns said the game means something different for the players at the high school, collegiate and professional levels.

“The high school, professional and college basketball games are different because of the parties involved in playing the game,” Wynns said.

“It is a business for the professional level. You may or may not see them playing hard. The collegiate player is playing because he/she is being ‘paid’ to do so through a scholarship. The high school player plays because he/she has the skills that allows them to represent his/her school and to enjoy the camaraderie with the teammates.”

Tackett said the scorer’s table staffing would also be a significant factor in discussing the shot clock.

“While some of our schools have outstanding individuals with great capabilities that man the required positions of scorer and timer, the prospect of finding an additional qualified individual would be very difficult for the vast majority of the member schools, especially at the non-varsity level,” Tackett said. “We use our playing rules at all playing levels (freshmen, junior varsity and varsity), and the table personnel issue is very real.”

Fishman likes the shot clock concept, but said he also appreciates the logistical and financial implications.

“Using a shot clock with a 30-point mercy rule might help, but what about the girls who are paying high fees to play? It is inherently wrong to speed up the game,” Fishman said.
Tackett said the philosophical statements made by coaches in Kentucky should be duly noted.

“Many lament the current state of the college game, its lack of fundamentals and hurried play,” Tackett said. “There is a widely held school of thought that the push to play within the shot clock has contributed to the erosion of fundamental play."

Mike Dyer is high school sports editor for the Cincinnati Enquirer. He has been covering high school sports in Ohio since 2000 overall and has been in Cincinnati since 2004. He previously worked for the Akron Beacon Journal and the Sun Newspapers. Some of his articles have also appeared in the Washington Post, Orlando Sentinel, Cleveland Plain Dealer and Pittsburgh Post-Gazette.