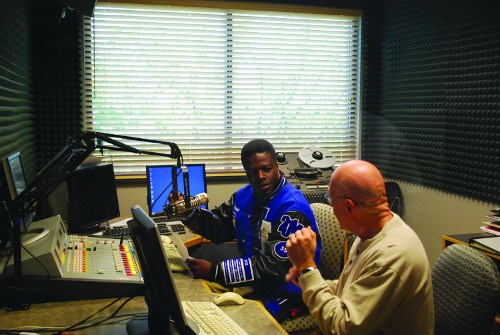 While attending the 2015 NFHS National Student Leadership Summit in Indianapolis, Indiana, with two local students, members of the New Mexico Activities Association (NMAA) staff were hit with a harsh reality. According to NMAA Deputy Director Dana Pappas, she and her colleagues learned just how “out of touch” many state associations are with their students.

“There is definitely a disconnect between state association offices and the actual kids,” Pappas said. “We work with coaches, we work with officials, we work with athletic directors, so I think building a relationship with young people is one of the best things that we can do.”

Nationwide, state activity and athletic associations are understanding the value of including students on advisory councils. No matter their task, these student groups are becoming common from coast-to-coast for state associations looking to improve upon well-established mission statements.

For the NMAA, a decision to create a student advisory council soon followed. Pappas said the council is not only expected to promote a positive image for interscholastic activities on a peer-to-peer level, but also assist in the development of positive relationships.

“It was really an eye-opener for us because the kids that went to Indianapolis with us were saying it was so nice to see that the NMAA isn’t just a group that says ‘No’ all of the time,” Pappas said. “We wanted to provide a voice for our constituents, which are the students, and ultimately utilize them to help carry out our mission.’”

The NMAA recently elected membership for its inaugural student advisory council. In order for a student applicant or nominee to be considered, he or she is required to have a 2.5 GPA or higher; participate in two or more NMAA-sanctioned activities; include a letter of recommendation from the school principal, coach or activities director; and submit a 250-word essay stating an interest in being a member. 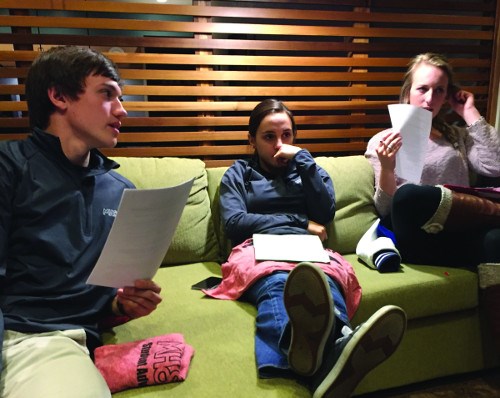 “It’s very important to get a student’s voice. That’s the key to why Gary wanted to establish this. We wanted to ask them questions and get their responses, get their input on things,” said KSHSAA Assistant Executive Director David Cherry. “They are an advisory, so they don’t have a voting purpose, they don’t have a rule-making purpose or anything like that ... Hopefully we can grow from it with them because it’s an educational back and forth.”

Cherry said the plan for the KSHSAA’s SAT was never to “recreate the wheel.” In adopting the MSHSL’s structure, Cherry and his fellow association members seek “well-rounded” second-semester sophomores to serve a two-year term as part of the 12-member team of evenly distributed boys and girls.

“We want kids who are not only in athletics, but also in activities, fine arts and student council,” Cherry said. “We have another leadership program here in Kansas called KAY, so we look for Kansas Association of Youth kids.”

As part of its duties, which include writing and recording public-service announcements, the SAT is given the task of selecting the Kansas nominee for the Heart of the Arts and Spirit of Sport awards. Cherry said each year Kansas gets six to 15 nominees for the awards, and it’s at that point the “cream rises to the top” as the SAT ranks the nominees.

“It gives them ownership with this award,” Cherry said. “When we present it, we know we present it on behalf of the student advisory team and the activities association because they are the selection committee.”

The noteworthy work of students is far-reaching, extending north to Michigan, where their impact is found with a growing number of Battle of the Fans contests and with a NFHS Learning Center course. The Michigan High School Athletic Association’s (MHSAA) Student Advisory Council (SAC), now in its 10th year, assisted with production of the online “Captains Course” alongside Michigan State University’s Institute for the Study of Youth Sports (ISYS). Throughout the course, 20 past members speak, offering peer-to-peer guidance that’s proved to be beneficial for student leadership campaigns.

MHSAA Director of Brand Management Andy Frushour said the intention of the course is to mold team leaders. He added that the course will help those leaders solve problems in certain situations because, in spite of their earned team distinction, they haven’t necessarily been taught captain responsibilities.

In addition to the “Captains Course,” seven years ago the MHSAA SAC published Captains 101 for prospective or team captains. Currently in the process of producing the second version, Frushour said the original 12,000 manuals were sold in little time to individuals all over the world. 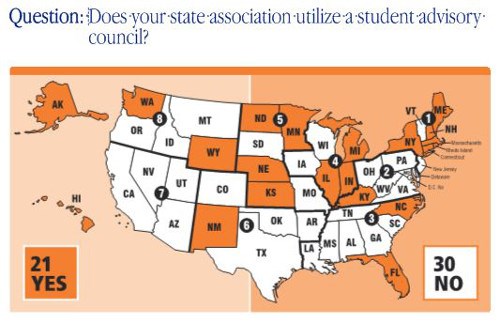 The manual’s second version will also be modeled around the online “Captains Course,” according to Frushour, who said among topics to be mentioned are what it means to be a captain and the four pillars of leadership: motivation, team cohesion, communication and positive peer modeling.

“It’s a lot of work. There’s no doubt about that. But we do these programs for the benefit of the students,” Frushour said. “I think sometimes when we’re here in the state association office and not in a school, we can forget what it’s like to be around students. Hearing their voices and getting that burst of energy from these really great students has really helped me do my job in the past 10 years since we started doing this.”

Like Kansas, IHSA Assistant Executive Director Beth Sauser said its SAC members record PSAs that air during games, in addition to running their own leadership conference.

“We need to stay in touch with what is the student’s perspective,” Sauser said. “Usually coaches, administrators and advisory committees have a voice. But overall, what do the students think? They probably live in their own little bubble, and I think this is something we all do when we’re spread out across the state. A school of 90 isn’t going to have as many activities and programs as a school of 8,000. Does that mean they can’t have them or they can’t co-op? So what services are available and what are they looking for. What do the kids think?”

Sauser said its 21 SAC members range from those attending their largest school of more than 8,000 students all the way down to a school with a student body of about 90. Through their student-run conference, promoting communication, leadership and the “Do What’s Right!” sportsmanship program, the IHSA SAC has been able to aid students by providing feedback on issues they’ve already encountered while in school.
“I think the feedback from the students who have graduated, whether they’ve served one year or three years, is that it’s one of the best experiences to prepare them in life,” Sauser said of the student leadership conference.

An “Around the Nation” poll from the October 2012 High School Today revealed that 17 states were utilizing some type of student advisory council or team. That number has since grown to 21 with New Mexico, New York, Kentucky and Nebraska adopting similar programs after learning of their value to state associations (see Around the Nation map on page 11).

“I don’t think there’s any better ambassadors to spread the mission of a state association than the kids that you serve,” Pappas said. “So at the end of the day, the goal is to get the kids to carry the banner for you a little bit.”