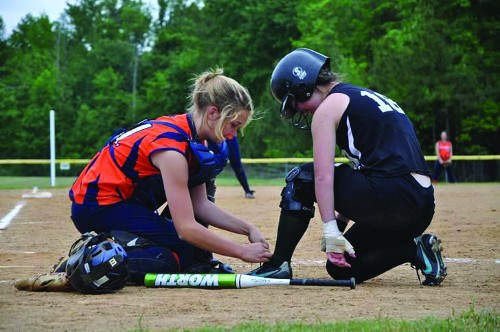 It can be difficult to teach good sportsmanship and citizenship at the high school level. In many cases, the best way to encourage student-athletes to achieve high standards of behavior is to lead by example and provide opportunities that allow them to thrive. For Virginia student-athletes, the foundation for those examples and opportunities was provided by Claudia Dodson, a former assistant director of the Virginia High School League (VHSL) and NFHS National High School Hall of Fame member.

“Claudia was a big proponent of sportsmanship and felt like we really didn’t have anything in place,” said Tom Dolan, VHSL assistant director for compliance. “It was really at her request that we started to recognize schools for those areas of sportsmanship that we felt were important.”

Dodson’s dedication to promoting standards of behavior expected from coaches, athletes and fans led to the creation of two VHSL sportsmanship awards almost 20 years ago, one of which now bears her name.

The Claudia Dodson Sportsmanship, Ethics and Integrity (SEI) Award is presented annually to schools that successfully complete a self-assessment tool developed by the VHSL staff. The online form features a checklist of 50 items in six categories and requires schools to achieve a certain percentage of points throughout the year.

The points include making sure student-athletes shake hands with the opposing team before and after contests, athletic directors communicate components of good sportsmanship with student-athletes, and cheerleaders lead only positive cheers that boost their school’s spirit. Even parents play their part – if they applaud, follow directions from the cheerleaders and refrain from throwing objects on the playing field, they can earn their school three points.

“It is really the most prestigious award we give as a state association,” Dolan said. “You’ve got to hit some pretty good benchmarks to get it.

“It really gives you kind of a building block to a successful sportsmanship program.”

Dolan said the self-report process inspires schools to take an honest look at their sportsmanship efforts, particularly when it comes to ejections. Schools must deduct points if they have had an ejection at any point during the year, which makes it harder to achieve the award. Any school with more than one ejection is automatically ineligible.

Last year, the VHSL also added a peer review form it can ask schools to fill out about their opponents. Dolan said they are also considering allowing the districts to weigh in as well, as another level of confirmation.

“They now have to get three school recommendations on a point system [to verify] that they have, in fact, done what they say they do,” Dolan said. “That’s been an addition this year and has worked pretty well.”

The VHSL also gives out the “Stay in the Game Award” every year, which recognizes schools that receive no player or coach ejections during the year in any sport. Dolan said more schools tend to qualify for this award. Last year, more than 60 schools won it, compared to the 39 recipients of the Dodson SEI award.

“Every school wants to get [the Stay in the Game Award],” Dolan said. “It’s based on teaching the right things and making sure the student-athletes and coaches do what they’re supposed to do. It gives people something to aim for in a sportsmanship category. I absolutely believe the Claudia Dodson Sportsmanship, Ethics and Integrity ramps it up a little bit.

“Both have their merits in their own ways. It’s given our school-base two avenues to go on the sportsmanship side.”

Dolan said offering those different opportunities to achieve a high level of sportsmanship is one of the best ways to pay tribute to his former colleague and mentor. “I’m proud of anything that honors Claudia Dodson because she was a pretty special lady,” Dolan said. “Frankly, I’m proud to honor her and proud of the fact that schools take a lot of pride in honoring that award and the process they have to go through.

“It has established, in her name and legacy, a kind of expectation and I’m extremely proud that our schools stand up for what she established and what she believed in.”